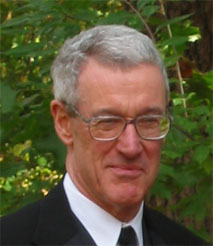 This year again, the Bioelectromagnetics Society had the challenging task to choose between outstanding nominations competing for the 2015 d’Arsonval Award, the most prestigious recognition from our scientific society. These nominations were first carefully reviewed by the 10 members of the BEMS Awards Committee (composed of 5 board members and the last 5 d’Arsonval Award winners) before a recommendation was submitted to the Board of Director for the final vote.

In conclusion of this process, we are now very pleased and honoured to announce that Dr. James Weaver is the 2015 d’Arsonval Award winner, in recognition of his outstanding achievements in Bioelectromagnetics Research.

Among Dr. Weaver’s wide-ranging contributions to Bioelectromagnetics, described in over 100 peer-reviewed publications in journals including Science, Nature, and Proceedings of the National Academy of Science U.S.A., are research on cells and organisms in weak electric and magnetic fields, including as possible risk factors for childhood leukemia, enhancement of transdermal drug delivery, mathematical models of cells and tissues in electric fields, and microdosimetry for biophysics and for clinical treatment planning.